The Inception of the Peacock

The last day of 2012 seems the perfect time to start at the beginning: the sketches.

Like I said before, the rough idea for this costume has been in my head for a few years, but the end of September stirred me to action. Every year my office has a Halloween costume party. While trying to come up with costume concepts for the annual company soiree, I encountered a problem and a moment of self realization that I shared on facebook.

September 26, 2012 - "Planning a Halloween costume inevitably leads me to thoughts of Mardi Gras, cravings for liquor, mambo rhythms in my head, and a subcutaneous quiver of energy that only February can bring. Thus I sabotage myself into reimagining every simple potential October costume idea as a far more elaborate, expensive, and time-consuming version of itself for February. Halloween's great and all, but let's be honest about which month brings the better party. The problem is compounded by the fact that once one has made a few costumes, one loses all concept of "knowing when to say when" and the ability to judge when one's costume is "finished" and 'perfect.'"


Later that night, for the first time since art school, I had a middle-of-the-night "Eureka!" moment so intense that I had to get out of bed and sketch. Me! Sketch! If you know me, you know that I hate to sketch. But there are a few occasions when I get so excited about a project that I feel that if I don't get the ideas out of my brain and onto paper my thoughts are going to start leaking out of my ears. Gross, right? So I threw back the covers and doodled this, half asleep: 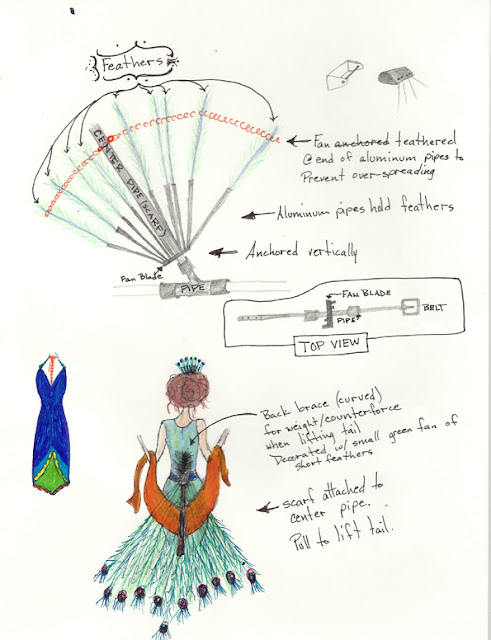 The fact that my attention to visual detail boarders on neurotic is also why I think this whole cliché peacock costume is going to be a success. I've seen peacock done a dozen times, but I've never seen it done right.


I'm almost 31.
A cheek-length tutu no longer constitutes permissible outerwear.
Not even during Mardi Gras.

So with these existing peacock samples in mind, here's my costume criteria:


Basically, I just want to do my part to help to make Mardi Gras the amazingly and indescribably decadent onslaught of sensory overstimulation that it is. Here are a few of my fave-o pics from last year. These costumes were all homemade, and they were all positively arresting.


So to this end, I've done a few more doodles in the months since September, but mostly just to work out the details of the accessories and the mechanics of the tail. That tail is giving me hell because it must, of course, be perfect. And by perfect, I mean fully functional.
Up. Down. Open. Close. And BIG. 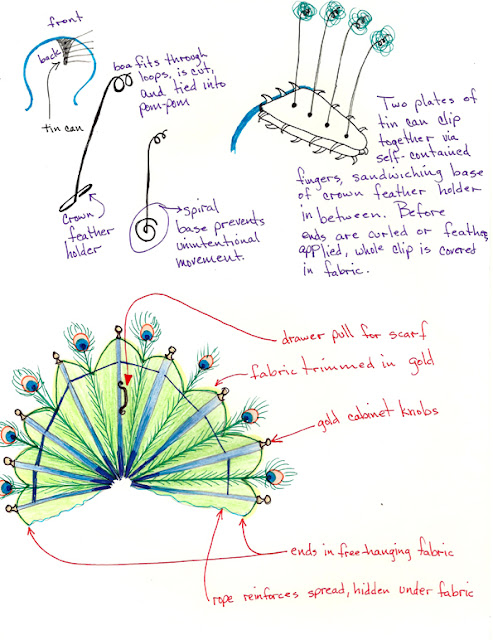 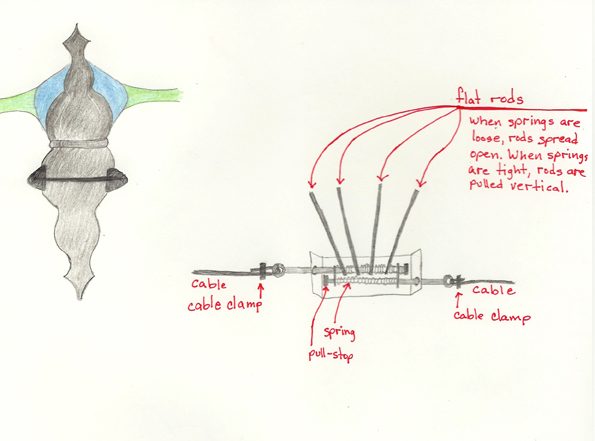 All the other plans are still just swimming around in my head and probably getting close to leaking out of my ears.

Posted by Swizzlebent at 5:19 AM No comments:

Born on the Bayou

1982 ushered in the birth of a shy, creative only child who could be found hiding in the faux fur racks of every department store she entered. No trip to K-Mart was complete unless her fingers were stained with exotic eyeshadow shades. The heel of every stiletto in her mom's closet was disfigured from scuffling in tiny feet across linoleum floors. And somewhere there's a VHS recording of her at the age of four doing a riveting interpretation of the hula to The Pointer Sisters on vinyl, wearing a little blue plaid ruffly apron, a long stand of imitation pearls, and saggy Care Bear panties.

I am Swizzlebent. And I was born to play dress-up.

I have known for as long as I can remember that I was meant to live in New Orleans, but Mardi Gras 2011 was my first run at Carnival as a NOLA resident. It's an experience for which no number of neighborly anecdotes and no amount of personal parade route research can prepare you. I mean, I'm from South Louisiana. I've done Mardi Gras since the year I was born and have even spent a few Mardi Gras weekends in the city. But Mardi Gras as a resident of New Orleans is something that cannot be described. If you're not in costume, you may as well not even leave your house, and my lack-luster "costume" that year consisted of a flowery blue sock-hop skirt and hair extensions.

I just wasn't ready. Luckily, I had quickly fallen in with the most amazing group of coworkers one could ever assemble, and in that company, I learned all the secrets. I wasn't even home at the end of the night before already giddily fantasizing, now that I had some first-hand experience under my belt, over how I was going to drastically up my game for Mardi Gras 2012.

But things didn't quite work out that way. Long story short, I managed to bulge a disc or two in my back and spent most of 2011 hunched over and hobbling around Quasimodo-style with pinched nerves, feet that would go numb at the most inconvenient moments, and the aid of a purple metal cane who I'd affectionately named Herman.

I was pretty glum for a while.

It's hard to feel sexy or get happy about much of anything when you can't even stand up straight enough to reach the whiskey in your liquor cabinet. I made it through Mardi Gras 2012 with as much enthusiasm as I could muster. Hell, it was an accomplishment just to make it around downtown all day dressed in my recycled-from-Halloweens-past belly dancer ensemble without having to be carted off in a wheel chair. It wasn't easy, but I definitely don't regret it.


Anyway, with lots of luck and a little yoga, I'm closing out 2012 in a remarkably vertical and relatively pain-free position.

It's December. The stress and all-consuming commercialism of Christmas is finally behind us, and the first day of 2013 is just four days away. And that means that Mardi Gras is here again at long last.

I think if I post another costume status on facebook, my friends are going to start blocking me. I'm not quite as obnoxious as that friend whose every update is concerning the color and texture of their newborn's latest dirty diaper, but almost. Almost.

So this is where I'll share the process of finally bringing to life this costume that has been stewing in my brain for at least three years. In some form, I think it's been in my head since the 1980s and fur coats and eyeshadow.

And once the season's past, I'll probably just keep on writing about the lovely insanity one endures as a normal part of living here.

'Till then... Happy Mardi Gras!
Posted by Swizzlebent at 7:54 PM No comments: