Let me begin with a disclaimer:

A seamstress I am not.

My mom is. She's INCREDIBLE with a sewing machine. When I was little I asked her to teach me how to sew, and although she gave numerous valiant attempts at imparting all her Singer wisdom upon me, I was a terrible student and got frustrated easily and whined and threw tantrums and eventually we both just gave up.

In high school I had a few HomeEc classes (and it was still called that back then), but the teachers barely knew more than I did and were mostly just crotchety old spinsters more interested in chastising the class for not properly bleaching the sinks after the last cooking lesson than in helping us hone any skill that was actually useful outside of restaurant janitorial services.

So sewing has remained the one crafty skill that I've never been terribly good at or interested in, and what little I do know has come through lots of trial and error, a ton of cursing, and patient lessons from mom long after I moved away from home. And also through bare necessity in trying to pull off undertakings as idiotically ambitious as this one.

When I first moved away from home, mom asked if I wanted to bring one of her old sewing machines. I figured it couldn't hurt, so I graciously accepted it and it sat unused on the a storage shelf in my tiny apartment for about three years. I don't remember when I finally lost my phobia of it, but at some point I took it out to mend something and we made a kind of fragile peace with one another. After I moved to New Orleans, my neighbor had his mom's old sewing table that he was using as a wet bar, and one night he came knocking on my door to ask if I wanted it before he threw it out. It took a little McGuyvering, but I finally got mom's old machine mounted onto it and me and the machine have been much more civil with one another ever since.

I have it set up in the front room of my shotgun apartment overlooking Magazine Street. Lots of workspace and room to lay stuff out on the floor. This, as they used to say on MTV Cribs, is where the magic happens.

The weekend after Christmas, it was time to get to work.

The "pattern" for the dress is a simple scarf dress. 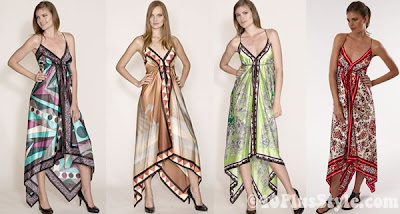 If you don't already own one, you should. They are my summer weekend wardrobe staple. So comfortable. So cool. So forgiving. They retail for $30-$60, but they're so ridiculously easy to make yourself.

They're really simple affairs. Just two squares of fabric sewn together along two perpendicular edges with a couple of drawstrings to adjust and secure them. It's the perfect solution for my peacock ensemble not only because the shape is beautiful and fluid and oh-so-feminine, but also because I plan to wear this thing for at least five years and I could gain 100 pounds and still adjust it to fit.

Scarf dresses are simple, but I'm not very good at the K.I.S.S. rule. My peacock dress is going to involve 8 layers, each a different color. This'll make it flow better, cover more body, and just look damn amazing, especially when I walk or dance and it flows behind me.


With one of my own scarf dresses as a template, I set to work.

And a couple hours later, there she was! Short in the front, long in the back. Long. TOO long. But that was on purpose because I knew I'd have to trim away lots of excess to get the color tiered effect I was looking for. Nevermind the pink insulation foam taped over the window. The boyfriend (Mr. N) accidentally knocked it out with a sheet of plywood during Hurricane Isaac and we haven't gotten around to replacing the pane yet.

My office closed early on NYE, and I raced home to commence with the costume making.

After trimming for what seemed like hours, everything was where it should be. I raised the front about 6", which brings it just above my knees. The back still needs some trimming, and I'll be adding a layer of green because I don't like the pointed, open look of a regular scarf dress.

The next dress steps are adding the under-the-boobs drawstring, the behind-the-neck clasp, and finishing the bottom edges in gold thread. But I feel like those are things I need a good full day's run at.

Meanwhile, the rest of my feathers came in today. I wish I could say I'm as impressed by these as I was by the first batch.

These are the feathers I'm planning to use for the headpiece. They're beautiful, but smaller than I expected. The length is a little short -- not one of them was a full 4 inches -- and the pretty "head" end is not as big as I thought they appeared in the seller's photos.


I experimented with one to see how it would look as I intended to use it. Honestly, I may just end up using the tufts of peeled feathers instead of the feathers themselves, but either way I'm sure I'll find some use for them.

Again, the seller didn't LIE -- they are indeed 10-12 inches -- but they aren't as high quality as the long ones were, and several are bent or broken. The eyes are kind of small, and I was surprised to find that most of the feathers are cut to lenght. I was expecting them all to have the natural nib at the end, but only 5 or so in the whole pack do. That's going to make it harder to build the tail as I had planned, but it's nothing that a little glue can't take care of. What I do like about these is the great variation in color. Some are almost chocolate brown, while others are striking neon green. I think they'll look better once they're all fanned out and intermixed with the longer feathers. But just to be on the safe side I ordered one more pack of of feathers today. It's a 25-count pack of 20-25" feathers. Unfortunately, the only seller offering this length is in China, and with international shipping running 8-28 business days, they may or may not make it here in time. Hopefully I've built up enough good Mardi Gras karma that the Universe will see fit to rush them across the ocean.

So that's where this whole operation stands for now. I'll have to make some more progress before I have anything new to post, since everything up to this point was just catch-up. Hopefully that'll happen this weekend with a full Saturday devoted to the sewing machine. Until then I should probably try to focus on normal life stuff. Like the counter full of dirty dishes that need washing. Yikes.

Here's hoping the temps in a month aren't what they are tonight, or I may need to find a way to incorporate thermal underwear and an overcoat into this whole ensemble.

Posted by Swizzlebent at 7:42 PM